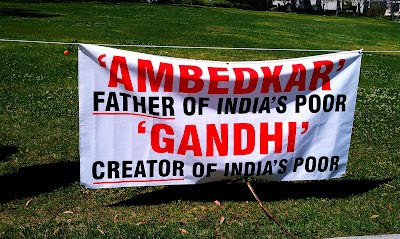 Gandhi and the Dalit controversy

1) The General Western perception of Gandhi is no doubt inspiring to many:


The danger of revealing a different truth about a sacred cow, like Mr Gandhi, is that the messenger gets shot.

Please do not despise Dr Ambedkar for his different truth, or me for my work for the empowerment of Ambedkarite Buddhists and other downtrodden (Dalit) people.
What methods of empowerment work and what methods uphold the deepest manifestation of "democracy" is a moot point.

2) The more informed position comes from the man who wrote, amongst a life rising from the "untouchables" to become the "architect & father of the constitution" of the Independent India; a role which it is said that Gandhi could see no other person in India being capable of fulfilling. Gandhi was able to support Dr Ambedkar at times, yet to go on hunger strike because of Dr Ambedkar's request for a separate electorate to empower the "depressed classes" was a tough challenge for Dr Ambedkar as leader of the Dalits. He gave in to Gandhi on this occasion and six weeks before his sudden death led 400,000 Dalits out of "the hell of caste" by leading a mass conversion to Buddhism in the central city of Nagpur on 14th October 1956.
Hundreds of thousands of other Dalits escaped the shackles of being part of the Hindu religion, which was inextricable from the caste system, by converting to Buddhism.
Generating a social system that fully respects all regardless of birth is still an ongoing struggle across the world, but perhaps in no country more than in India.


THE FULL MOVIE (English Version) of the Life of Dr Ambedkar, part-funded by the government
of the state of Maharashtra (the most 'progressive' state in India?)


And to make the difference, please absorb the current opportunities to support self-reliance projects among the Dalits via the Karuna Trust.


********
It is worthwhile considering further:
1) the relationship between Gandhi's vision for the future of caste and his ability to achieve it
& 2) Dr Ambedkar's vision for "The Annihilation of Caste" & his ability to achieve it (eg the Indian Constitution which his constitutional committee wrote and thereby the outlawing of practices of untouchability.
One article beginning to uncover these points is: http://baynvc.blogspot.com/2012/02/gandhi-and-dalit-controversy-limits-of.html

What Miki Kashtan does not elaborate on enough for my taste is the shackles of Hinduism which Gandhi did not manage to overcome & the radical (ie going back to the roots) approach Dr Ambedkar took to investigating what religion would serve the rights of the down-trodden people and neither tell those suffering that it was their punishment for past lives, nor that their suffering was simply to be nobly borne as their reward would be in heaven.

Dr Ambedkar's conversion to Buddhism continues to inspire many, as I saw in 2010/2011 in the state of Maharashtra, India & nowhere did I get a greater sense of potential being unleashed with only a little more support needed from the West now as at Nagaloka (The Nagarjuna Training Institute): http://nagaloka-dream-cycle.blogspot.com

Most students recorded their Visions (Dreams) in Hindi -and their films will have subtitles added.
The passion and determination to bring compassionate action to their localities is very evident.


Arya talks about Naxilism amongst other things
Click on a name below to see any of other Men's recordings:
Ajit
Bishnu
Bhagwan (in English)
Bhijay (in English and in Hindi)
Hemlal
Kamal
Nikass (in English and in Chakma, with translation text provided)
Raj Shakya
Sujeet (with a translator speaking the English after the Hindi)

Here are these five precepts chanted in Hindi:

Clicking on the Buddha will give you an opportunity to reserve a place at the 2nd pier fire anniversary event - the play...