"The Buddha of Sussex - Ethical Outings and Restorative Justice in Hastings & St Leonards" has the following story lines/themes: 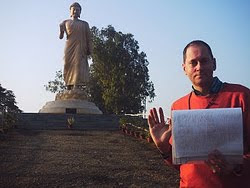 "The Buddha of Sussex - Ethical Outings and Restorative Justice in Hastings & St Leonards" has the following story lines/themes:

1) how a family lost it's uninsured home after a piece of paper was put through the letter box - alight
http://restorativejustice.pbworks.com ( Case 33 of 40 Cases)

2) how the internet enabled much valued conversations to be started in relation to the incident (www.peoplesjustice.org.uk)

4) a friendship between one of the 5 greatest civil-rights leaders of the 20th Century (Dr B R Ambedkar) and the 21st Century blogaholic, Paul Crosland AKA 'The Imperfect Idealist'
http://nagaloka-dream-cycle.blogspot.com

5) A pier development proposal inspired both by Sangharakshita's meditation teaching in Warrior Square & by the Angel of the North
http://hastings-dream-cycle.blogspot.com

With love from
Paul
Auditions on Weds 4th Jan 2012:
http://ethicaloutings.blogspot.com/2011/12/first-three-cast-members-january.html

Clicking on the Buddha will give you an opportunity to reserve a place at the 2nd pier fire anniversary event - the play...